As you may recall from my last book recommendation post, I was going to ask my husband to read, Mindset, for my Mother’s Day gift. I’m happy to report he did just that and since he liked it, I asked both him and my 13 year old son to read my new fave, Fail Fast, Fail Often, by Ryan Babineaux. I event sent it to my niece for her 8th grade graduation.

Fail Fast, Fail Often is a quick and easy read, and super motivating! I hadn’t thought of myself as a fearful person, but wow, as I read through the book and became more conscious of how, as just one example, I research things to death (Consumer Reports anyone?), I started breaking through layers of inertia, fear, etc. and just started doing/trying more things more often.

For example, a couple of weekends ago, a friend of ours told us about a fun one-mile race he and his family were doing in our town. It sounded fun, but this was less than two days before the event. Prior to reading this book, I would have just thought, “gosh, that sounds fun.” Maybe I would have put it on the calendar to try to schedule for next year.

But down deep, I really wanted to run the race with the kids…this year. Inspired by my new mantra, “fail fast, fail often,” I looked up the race website and found out it was possible to still register the day of the event, however, there were no details on where or how that could be done. Luckily, my husband was supportive and we both agreed that we’d just give it a shot knowing that the whole thing might be a “total fail” as my tweens like to say. We got up early and headed to the event not knowing how or if any of the logistics would work.

We scrambled a bit initially, but it did indeed work. We had a fantastic time, and the kids and I were bonded for the week afterward as as we limped around with our sore leg muscles. 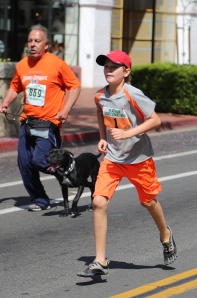 My son tearing it up with my five fingers.

My daughter screeching by me…

A few days later, my husband told me about a monthly community bike ride that was scheduled for the next day at 7:30pm and that he thought it sounded fun. Anyone who knows me, knows that this suggestion would normally have been met with a big fat, No Way, Nada, Zilch, NOT Happening, especially on a school/work night. I am fanatical about sleep, not only mine, the kids as well. But, I threw caution to the wind and repeated my now beloved mantra, fail fast, fail often, and agreed to go.

The next night rolled around and  while every ounce of my being wanted to have some hot chocolate and crawl into bed with a good book, I helped rally the kids who were understandably perplexed since we didn’t normally do this sort of thing so late. Nevertheless, off we rode, even with one kid in tears. When we arrived, we realized it was not a family friendly event in that most of the 20 something crowd were drinking and smoking — not just cigarrets. “Mom, they’re sharing smokes,” one of the kids observed with bewilderment. “Haven’t these people heard about germs?!?” the other questioned. We waited for awhile, but ended up leaving before the ride started because it was getting dark and cold. This outing indeed, seemed like a “total fail”, but even that was kind of exhilarating that we were actually living by the book’s mandate, fail!

Then, as we were riding home, and it was really dark and cold by now,  fail fast, fail often whispered to me and we decided to surprise the kids and stop for ice cream. This was even more out of the norm for us so the kids were elated. We celebrated our unusual outing and that we’d all pushed ourselves out of our comfort zones.

In hindsight and going back to synchronicity for a minute, I think one of the best parts (dare I say higher purpose?) of this bike ride, was that  some friends of ours who “happened” to see us on our way to the starting spot, stopped their car to say hello and ask if we were going to their party on Saturday night. I’d been having issues with my email and hadn’t received the invitation. We ended up going to the event and having an incredible time! Had we not ventured out and “happened” upon them, we would have missed this magical evening.

I love what this book has done for me! It’s made trying and possibly failing quite fun! If you’ve ever heard me talk about “perfect pictures” in one of our readings, then this is the book for you! If I start cooking and/or, egads, actually entertaining, then we know it’s a miracle maker. You never know, stranger things have happened:)!